Serbian tennis star Novak Djokovic hasn’t earned his No. 1 ranking by taking the conventional road. There’s his odd ritual of excessive ball bouncing before serves, which can break an opponent’s concentration. There’s his new gluten-free diet, which he’s said has helped him feel stronger on the court. 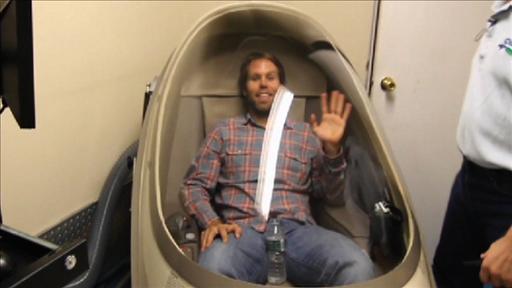 Novak Djokovic and other athletes are using a secret weapon called a CVAC pod that they believe boosts performance by simulating high altitude. WSJ’s Reed Albergotti spends some time in the hyperbaric chamber to see if he can feel any difference.

But now there’s something truly weird: the CVAC Pod.

Ever since last year’s U.S. Open, Djokovic has been trying to improve his fitness by climbing into a rare $75,000 egg-shaped, bobsled-sized pressure chamber.

The machine, which is made by a California-based company called CVAC Systems and hasn’t been banned by any sports governing bodies, is one of only 20 in the world. Unlike the increasingly trendy $5,000 hyperbaric chambers many professional athletes use to saturate the blood with oxygen and stimulate healing, the CVAC is a considerably more-ambitious contraption. It uses a computer-controlled valve and a vacuum pump to simulate high altitude and compress the muscles at rhythmic intervals.

The company claims that spending up to 20 minutes in the pod three times a week can boost athletic performance by improving circulation, boosting oxygen-rich red-blood cells, removing lactic acid and possibly even stimulating mitochondrial biogenesis and stem-cell production.

Djokovic is so convinced that the pod helps his game that during the U.S. Open, which starts Monday, he’s staying (for the fourth year) with a wealthy tennis-trainer friend in Alpine, N.J. who keeps one of the machines on his property.

Djokovic has never mentioned the pod publicly before. He acknowledged using it for the first time last week during a sponsor event in New York after he was asked about it for this article. “I think it really helps—not with muscle but more with recovery after an exhausting set,” he said. “It’s like a spaceship. It’s very interesting technology.”

The pod, which is seven feet long, three feet wide and seven feet high with the lid open, looks like a cross between a tanning bed and the giant egg Lady Gaga emerged from at the Grammys. CVAC says its pod is different from other pressurized chambers on the market because it combines altitude pressure with cyclic compression (a combination some studies suggest is more effective than one or the other). Because the pressure, temperature and air density in the CVAC pod can be adjusted, the company says it enhances an athlete’s ability to adapt to a range of conditions. 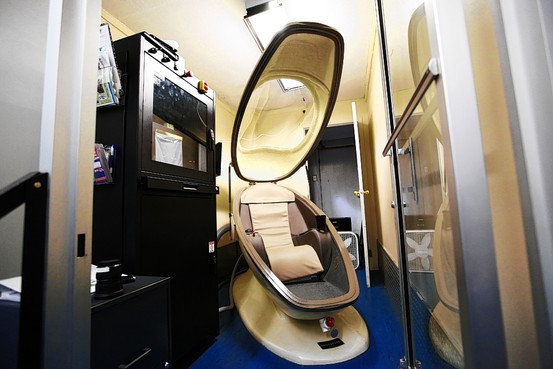 While pod users don’t do much beyond sitting while they are inside (cellphone use is permitted), CVAC Systems chief executive Allen Ruszkowski says the treatment seems to have many of the same effects on the body as intense exercise. He claims that the technology may be twice as effective at helping the body absorb oxygen as blood doping—a banned form of performance enhancement.

Former U.S. Olympic wrestling coach Bob Anderson, motocross racer Ivan Tedesco and ultra cyclist George Vargas say they’ve used the pod and believe it helps. CVAC’s Ruszkowski says a slew of other high-profile athletes use the Pod but often insist the company doesn’t tell anyone, “because they feel it’s a competitive advantage.” Rock star Axl Rose owns a pod as well, according to his spokeswoman.

The pod Djokovic is using for the Open belongs to 38-year-old tennis pro Gordon Uehling III, who reached a career-high ranking of No. 925 on the ATP Tour in 2001 and now runs a tennis school called CourtSense at the Tenafly Racquet Club in Tenafly, N.J. He has also worked with rising American star Christina McHale, who is ranked No. 66 and beat the top-ranked Caroline Wozniacki in Cincinnati earlier this month.

In addition to the indoor court, Uehling’s family estate features outdoor courts with different surfaces—plus an artificial lake, where Djokovic says he’s gone fishing. “We have absolutely everything here!” Djokovic wrote last August in a diary entry on his website. “You wouldn’t believe it.”

Uehling declined to comment for this article. Djokovic and other players who know him say he’s a visionary obsessed with cutting-edge performance technologies. “He loves to explore the future of athletic edges—and he has the resources to do it,” says former top-20 player Vince Spadea, who hit with Djokovic in Alpine last summer when he says Novak was first “experimenting” with the pod at Uehling’s estate. “He was looking to improve some of the challenges he was having—breathing capacity, allergies—and definitely something clicked there.” 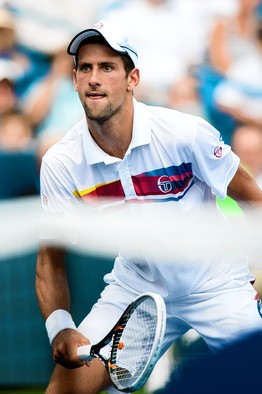 Southcreek Global/Zuma PressNovak Djokovic returns a shot at a tournament in Cincinnati on Aug. 21.

Spadea says he didn’t dare set foot in the pod himself because he doesn’t share Djokovic’s “daredevil mentality.” Djokovic’s Serbian countryman, Janko Tipsarevic, currently ranked No. 20, says he’s heard about the pod but hasn’t tried it yet, either.

Geoff Grant, tennis director at at Tenafly Racquet Club, says he braved the pressure chamber at Uehling’s request and felt like he was taking off in an airplane as his ears popped. He says he hasn’t used it enough to notice a difference in his play, but adds that some of his clients who go more regularly are hooked and “say it’s like a drug.”

“It’s weird—it’s definitely something from the future,” Grant said last week at the racquet club. “I think Novak was going to get in it today.”

In 2006 the World Anti-Doping Agency ruled that such oxygen tents enhance performance and violate “the spirit of sport,” but did not add them to the list of banned substances and methods, saying they would wait until further studies were conducted.

Patrick McEnroe, the USTA’s general manager of player development, says he’s skeptical that any such contraption could have much impact on tennis performance. “I don’t really take this stuff particularly seriously,” says McEnroe, noting that Djokovic has not only improved his fitness this year but has also fixed key problems in his game, revamping his serve and developing a newly devastating forehand. “Maybe there are a few things that have helped (Djokovic) mentally, but let’s remember that before he tried his gluten-free diet or went into a hyperbaric chamber he had already won a Grand Slam and beat Roger Federer.”

Lou Lamoriello, the general manager of the NHL’s New Jersey Devils, says he attended a presentation last year with his coaching staff in which Uehling cited Djokovic’s defeat of Roger Federer in the 2010 U.S. Open semifinal as evidence of the CVAC unit’s effectiveness.

Lamoriello says he was intrigued but not entirely convinced—and isn’t ready to have his players try it out yet. He said he wonders if some of the effect is psychological. “If you believe in something it’s going to be a lot more powerful,” he says.

Djokovic is the No. 1 seed in the mens’ singles draw at the Open. But he may need all the extra help he can get: A shoulder injury forced him to retire from the final against Britain’s Andy Murray at a tournament in Cincinnati earlier this month.

Write to Hannah Karp at Hannah.Karp@wsj.com